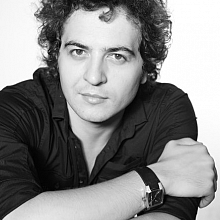 He is a graduate of the National University of Theatre and Cinematography “I.L. Caragiale”, Bucharest (2003). During 2005-2008 he studied acting at “Spiru Haret” University, with prof. Univ. Sanda Manu. He attended Classical Singing classes with maestro Corneliu Fănățeanu and pop and musical classes with Crina Mardare. The study of commedia dell`arte attracted him a lot, taking two profile courses in Romania and Italy (2006 and 2000).

He collaborates with professional theatres such as: Bucharest National Theatre (in “Chicago”), Țăndărică Theater (in “Svejk Galaxy” – directed by Alexander Hausvater, “Tom Finger” – directed by Daniel Stanciu, “Little Mermaid” – directed by Gabi Apostol), “Maria Filotti” Theatre from Brăila (between 1997-1999) and the Timișoara National Theatre (2014). As a collaborator of the Operetta and Musical Theatre “Ion Dacian”, his repertoire includes roles such as: Orlofsky in the operetta “The Bat” by Johann Strauss-son,

Mercutio in the musical “Romeo and Juliet” by Gérard Presgurvic and Boni in the operetta “Silvia” by Emmerich Kálmán.

His most recent role is Phantom in the musical show “The Phantom of the Opera” by Andrew Lloyd Webber, obtained after the casting held in 2014 at the Operetta and Musical Theatre “Ion Dacian”.