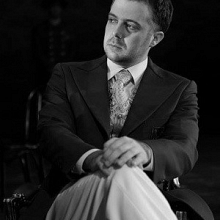 He graduated from the National University of Music “Ciprian Porumbescu” in Bucharest, classical singing department, in 2003, having as teachers Ionel Voineag, Marius Brenciu and Dumitru Trandafir. In 2000, during his studies, he attended a masterclass with Ionel Pantea in Budapest (Hungary). Since 2002 he has been the soloist of the Operetta and Musical Theatre “Ion Dacian”, where he made his debut in the operetta “The Bird Seller” by Carl Zeller. He has performed in the operettas “Let me sing!”, “Silvia”, “The Merry Widow”, “Victoria and her hussar”, “Countess Maritza”, “The Bat” (directed by Răzvan Ioan Dincă), as well as and in the musicals

“Broadway – Bucharest”, “Romeo and Juliet”, “Rebecca” (directed by Áttila Béres, music by Sylvester Levay), “Paris, mon amour” (directed by Răzvan Ioan Dincă). He also debuted at the Operetta and Musical Theatre in Budapest with the show “The Merry Widow” (as Camille).

In 2005 he made his debut at the Bucharest National Opera with the show “The Barber of Seville” by Gioachino Rossini. He also played leading roles in “La Rondine” by Giacomo Puccini, “Don Giovanni” and “Requiem” by Wolfgang Amadeus Mozart (the latter with the Chisinau Philharmonic and the “George Enescu” Philharmonic).

He participated in tours with the Operetta and Musical Theatre “Ion Dacian” in Cairo and Alexandria (Egypt), with the National Operetta in Budapest (“The Merry Widow”) in Italy; also, at the Opera in Odessa (Ukraine) and in Germany with the opera “La Rondine” by Puccini. In 2011, he won the Award for Best Musical Voice and Operetta at the “VIP Awards Gala for the Performing Arts” (2011) and the Sylvester Levay Trophy, which won the “Sylvester Levay” International Musical Competition (Serbia).