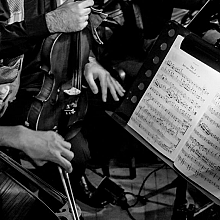 Soloists: Mioara Manea-Arvunescu, Tina Munteanu, Ernest Fazekas, Cătălin Petrescu
With the accompaniment of the “Romances” Band of the National Theatre of Operetta and Musical „Ion Dacian”

The Romances Concert brings to the fore a repertoire made up of classical creations of the genre, like: Love, bad weed, Besides the poplars without a husband, You’ll never know, Sing to me, kobzar and many others. Related to the lied, Romance is one of the oldest subgenres of light music Romanian, being defined as “a mournful song, an old story, in naive lyrics”, and the text his lyric was like a direct confession, understood by all. After 1848, Romance occupies a special place in the repertoire fiddlers, but also theaters.

The Romances Concert entered the repertoire of the Operetta and Musical Theatre with the participation in the “Monteoru Days” Festival – 2011 edition, the concert taking place then in a special setting, in front of the Monteoru Mansion, a heritage building, built at the end of the 19th century.